Ruthenium is an element of the eighth group of the fifth period of the periodic table of chemical elements, its atomic number is 44. Elementary ruthenium is a transitional metal of silver color. It refers to platinum metals.

Discovered by the professor of Kazan University, Karl Klaus in 1844, who published a large article on the new element “Chemical studies of Ural platinum ore residues and ruthenium metal” in “Scientific Notes of Kazan University” in the same year. Klaus reported on the discovery, production method and properties of the new element to G.I. Hess in his letter written in German, which he read at the meeting of Saint Petersburg Academy of Sciences on September 13th, 1844. This text was published in the Academy Bulletin and translated into Russian - in the "Mining Journal". Klaus isolated ruthenium from the Ural platinum ore in its pure form and pointed out the similarity between the triads ruthenium-rhodium-palladium and osmium-iridium-platinum.


The discovered element K. K. Klaus named ruthenium in honor of Russia (Ruthenia is the Latin name of Ruthenia/Russia). The name “ruthenium” was suggested in 1828 by G. V. Ozann for an element, which he mistakenly accepted as a new one, and Klaus, who really discovered the new element in 1844, gave it the name.

Ruthenium is obtained as "waste" when refining platinum and platinum metals. A significant source of ruthenium production is its isolation from fission fragments of nuclear materials (plutonium, uranium, thorium), where its content in used fuel elements reaches 250 grams per ton of “used nuclear fuel”. The technology has also been developed for ruthenium extraction from technetium-99 by neutron irradiation of molybdenum.

Ruthenium is a very inert metal.

Inorganic compounds Ruthenium does not dissolve in acids and water of depart (mix of HCl and HNO3). At the same time it enters into reaction with chlorine above 400°C (RuCl3 is formed ) and with mixture of alkali and nitrate during melting (ruthenates are formed (eg. Na2RuO4,)). 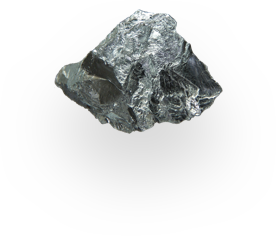